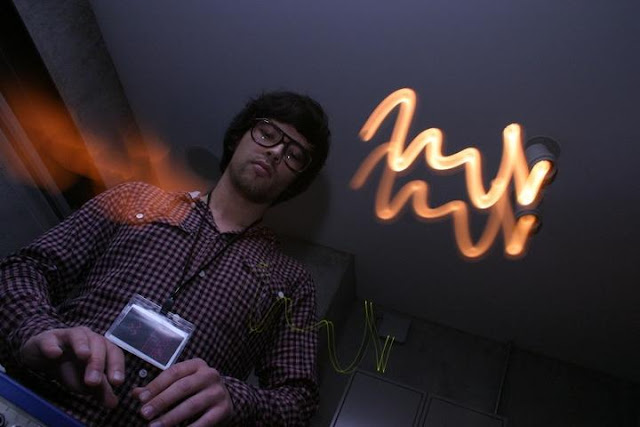 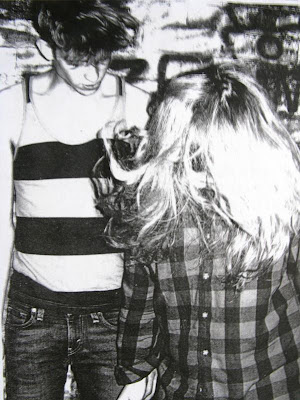 This duo coming all the way from Vancouver, BC is creating new noise/punk in fun and exciting ways. They're made up of Andrea who plays bass/sings and Daniel who plays drums. I haven't been this excited to see a new punk band in years. I recently was lucky enough to interview them briefly about their influences, favorite producers and how they feel about the Real Housewives of New York. They seem like pretty silly kids and I'm looking forward to meeting them in person. Nü Sensae will be playing the Atlantic in Gainesville, FL Friday June 11th with touring partners Shearing Pinx.
Where are you currently?
A - Providence, Rhode Island.
Who are you in the band and what do you play?
A-Andrea I play bass and sing.
D- Daniel, I play the drums.
You're currently on tour with Shearing Pinx, how is that going? You're both from Vancouver, is there any kind of camaraderie or competition going between you 2?
A- We hate them, they hate us, it's cute.
D- We have all known each other many years. Our first show was with the Pinx.
It think it's pretty obvious to say you guys sound or influenced by Sonic Youth or maybe Nirvana. What other artists sonically are you influenced by and why?
A- I got into those bands a lot more after playing music, I always liked them, but I was thinking a lot simpler like the Germs or something.
D- I love Nirvana and Sonic Youth. But I am also influenced by lot of bands that don't sound anything like us..Patti Smith, The Breeders, Stooges, X...
If you could work with any producer who would it be?
A- Rick Rubin, I like what he did with Slayer.
D- Nina Simone, bring her back!
What new bands/artists are you following and who maybe would it be a dream to tour with?
A- Cult Ritual.
D- Tv Ghost and Swimsuit.
Is this going to be your first trip to Florida?
A-Yes!
D-Yes!
On tour what are you listening to in the van?
A- I've been listening to the first record by Epitaph, a German Sabbathy band from the 70s and Neil Young
D- Pixies, Babes in Toyland, Kurt Vile
What is your favorite city outside of Vancouver?
A-I really like California.
D-I like New York, Philadelphia and southern California.
Where would you like to tour?
A- Asia.
D- Antarctica / Europe.
Do you think we should hold Tony Hayward (CEO of BP) responsible for the oil spill in the gulf?
A- He's dead to me.
D- I hold myself responsible for that.
What are you watching tonight, the Real Housewives Of New York finale or the Celtics vs. the Lakers? Don't worry, I'm not judging.
A- I wish I were watching Real Housewives of New York, although I prefer New Jersey
D- No way! ATLANTA!
Is there anything going on in Vancouver I should check out that I probably haven't heard of art wise?
A- Yes, C/R/I/T/I/C/S/.
D- Leanne Carmicheal's photography.
Is there anything you'd like to say to Florida before you get here next Friday?
D- We don't have tans...
Nü Sensae: "Cat's Cradle" (mp3)
Nü Sensae: "New Lies" (mp3)

Posted by Blueblogs at 7:33 PM 4 comments: Links to this post 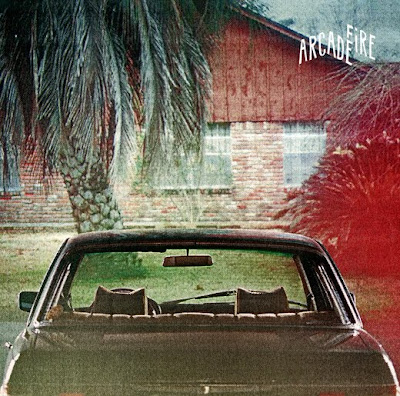 I remember 2004 so well, there were releases from Animal Collective Sung Tungs, Madvillain Madvallainy, Dizzee Rascal Showtime, and countless others where I actually thought music was as amazing as it was when I was 12 years old. Arcade Fire was part of this affair with Funeral. The album was as if David Bowie made a concept album about the post-apocalyptic world circa 1973, but not then now. To say the least I was blown away from all this music. I even saw Arcade Fire on tour, the band wasn't very tight yet, but the passion was there and you knew in the future they would dominate.

About 3 summers ago I saw Arcade Fire again, this time at ACL festival. The band had gotten tighter but the new record was so cheesy and full of in-your-face messages that I couldn't get into it. The stage and show were also littered with cliché, atheist-type propaganda that I always hate seeing. Neon Bible's were everywhere. That name alone (Neon Bible) gives me a stomachache. I had to walk away and go home early.

To get to the point, The Suburbs the new Arcade Fire single with b-side "Month of May" is everything you want from whinny, rich, spoiled kids who are bored and don't want to think about anything new except the same cliché bullshit. OKAY Arcade Fire, we fucking get it. The Suburbs suck and are part of the pollution to American culture. I don't want to hear about it anymore, and I hope all you other indie bands get the same idea. I think I'd feel kind of weird if I was a grown ass man and my fan base was 16 year-old kids in all black who have these formulaic thoughts of life and being alternative. What happened to individualism? Was American Idiot any influence on Neon Bible/The Suburbs? Similar ideas are on both records, one's just dumbed down more than the other. I feel both bands are using their stardom to spread their thoughtless, unoriginal thoughts of America and the future to their empty fans.

This was written due to people wanting to read bad reviews sometimes from me. I'd go on comparing the 2 bands but I don't want to give them more press that they don't deserve.

Arcade Fire: "Month Of May"

Bored with the USA 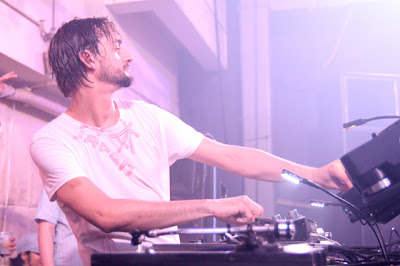 A great icon was just denied access into the US. I can't fucking believe this, one of the best DJs in the world can't obtain a visa into the states to headline a music festival in Detroit called Movement. Ricardo Villalobos hasn't played here since 2002, and might not anytime soon. What the fuck is wrong with this country? Maybe I'm one of the only minimal house kids I know but this guy is still the real deal. (via XLR8R)
Ricardo Villalobos: "Easy Lee"
Ricardo Villalblos: "Dexter"
Posted by Blueblogs at 11:39 AM No comments: Links to this post