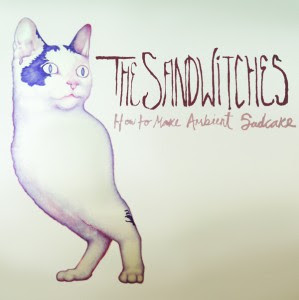 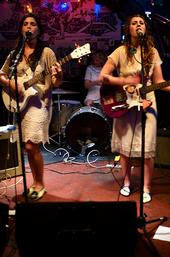 It's funny to me that bands like the Sandwitches don't get more press. They have soul, song writing ability, and they're never cheesy. It seems people just want to hear over-produced pop songs that mean nothing and have some shitty hook. Even more appealing to me is that sometimes you see the Sandwitches in clown costumes and sometimes you see them in Loretta Lynn type outfits from the 1960s. People are so obsessed with image that they don't know how to have fun and enjoy quality music anymore.

The Sandwitches are a lo-fi lady trio (I feel sexist saying girl group) from San Francisco, California. The members are Grace Cooper, Heidi Alexander, and Roxy Brodeur. Their sound goes from gothic folk to 60s pop with deep influence in soul, especially the vocals. There is an overall 60s production style going on but without ever feeling gimmicky.

The newest record is called How To Make Ambient Sadcake and was released on Turn Up Records. If you haven't heard it yet, dip your balls in it. The band is also playing Gainesville, FL on Sunday, March 14th at venue TBA and lots of other shows across the states with bands like Thee Oh Sees, Washed Out, Real Estate, and Best Coast.

(for some reason my fonts, sizes, bold and italics aren't working so this interview doesn't look as nice as it could)

So who are you girls and where are you from?

Who are some of your biggest influences (could be music or non-music related)?

When I first read your band name, I thought this might be a silly, lo-fi, female band. Is that the intention you had or is there some long running inside joke?

Well, that's sort of what we are -- except now we've got our man Lance -- but moreover we accidentally happened upon the name in conversation and unfortunately couldn't help naming ourselves that once we though of it, despite our own better judgment.

You ladies are playing the Gorilla vs. Bear Showcase at SXSW, and you're playing with Thee Oh Sees out west in March. To me, all that sounds like a pretty big deal, how do you feel about all that?

We feel pretty good about it. Thee Oh Sees are good friends but all the kind press was unexpected and we feel real lucky to have it.

I believe this is going to be your first trip to Gainesville and Florida. Are you excited about that as well? I'm excited that you are playing, we get a lot of punk, metal and alt country shows here which is fun but there's a lot of good music out there that's not coming to Gainesville.

Heck yes, and we'd love to see a gator.

Are there vegetarians in the band?

What fast food do you eat on the road? Do you make food before hand, gas station snacks, weed brownies, hot-pockets, fruit roll ups?

Are there any straight edge people in the band?

We'd rather not answer that question.

Take it to the max we guess.

If anyone could produce your next record, who would do it?

Phil Spector, so has he keeps his trigger finger in sight.

Domino's recently said their pizza won in a taste test over Papa Johns. Do you believe this and whom do you prefer?

ROUND TABLE!!! We're no fools.

Anything you want to tell Gainesville before you play here?

Those we seek only loves peace and pleasures are better to pass out of love's domain, but they will not laugh all their laughter, nor cry all their tears.