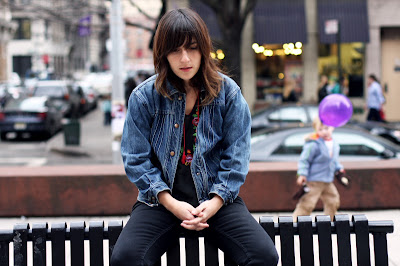 Nite Jewel is Ramona Gonzalez from Los Angeles, California. She released a record last year entitled Good Evening to rave reviews and is currently on tour and on her way to Florida. She will be playing in Orlando on Feb. 9th at Backbooth and in Tampa on Feb. 10th at Crowbar.

Nite Jewel’s sound can be described as lo-fi dreamy bedroom disco with 80’s synths and hints of 90’s R&B. I know that sounds like a lot, but when you hear it, it makes sense. The lo-fi end would come from the fact that she only records on an 8-track with analog keyboards and drum machines, which to me gives the recordings the edge and uniqueness that makes her work different from other indie bedroom-recording artists.

Ramona is married to Cole from Haunted Graffiti (who sounds like a more FM pop, lo-fi, tripped out version of Syd Barrett). Together with a few other friends they create Nite Jewel. Ramona is also working on a record with Dam-Funk (a futuristic funk artist) under the name Nite Funk, how great is that? That record will be released on Stones Throw Records sometime in the future. Did I just say in the future? No shit. Ramona also just released a podcast mix for Stones Throw, which is killer and sounds a lot like her music. It’s podcast 54, check it out.

I had a chance to catch up with Ramona and ask her a few questions. Also, I feel more in love with the fact that she answers her own e-mail. How many artist do that nowadays? Make sure to see her while she is in Florida.

Where are you right now and what have you been up to lately?

I'm working right now. I'm reading about Eno's Another सोमेव्हेरे वर्ल्ड.
Lately I've been recording and figuring out how to get from my house
to the car without getting drenched in rain.

I feel the LA scene has one of the most progressive scenes right now in terms of alternative music with acts like Flying Lotus, Nobody, Health, No Age, Dam Funk, Nite Jewel, etc.. How do you feel about it and how often do you see live music?

I love it here, I feel that I'm surrounded by a lot of creative
people. I haven't been out to see many live shows since I've been
touring a lot. As one of my professors said, "We get to the point
when the only shows we are able to see are our own."

I just watched your XLR8R Tune in an Afternoon with Dam Funk entitled Nite Funk. How was that experience and how was working with Dam Funk?

It was pretty much exactly how you see it on the program. Chill, easy
breezy, and fun.

How do you find out about music new or old (blogs, magazines, friends, infomercials, B.E.T.)?

I find about old music as a daily ritual. With new music, I usually
get advice from friends about what to listen to. Once in a blue moon
I'll turn on KCRW just to see what the kids are into, which
occasionally is good.

I know you're coming to Florida on your tour. Will this be your first trip to Florida and did you purposely miss out on Gainesville? Just kidding about the last part.

First time in Florida, yes. I'm super excited! I hear Gainesville's
a liberal town, don't know how it was overlooked!

I've been seeing your record Good Evening sold out on lots of websites. Does this give you a comforting feeling or are you pissed that your record company didn't press enough copies?

Haha. I put it out myself so I don't mind really.

What are your plans for the new year?

If anyone could produce the next Nite Jewel album, who would you choose and why?

It's currently being produced by myself, Cole Greif-Neill, Scott
Thiessen, and David Barrett.

To me your record is a kind of staying inside, cooking dinner with friend(s), smoking some weed and taking it easy. Did you have any intention on making a record like this and does this reflect who you are?

I had no intention in making this record, but I'm glad it ended up
soothing. Seems obvious that my music would reflect who I am. I
guess lately I have been sort of a homebody.

It's hard to make a living doing music. You have to be extremely
savvy. There are lots of desperate people in the industry trying to
find any way of giving less money to the artist. That's because less
money is coming in to the industry due to the internet and what not.
So we as artists have to do it our own way. That's why I am trying to
self-release my recordings most of the time, which means I don't pay
myself an advance. So I have to work, but I don't mind really, my job
is pretty easy. It doesn't blow my mind that my favorite artists have
day jobs. A lot of my favorite artists were never and will never be
popular. That's okay. Many great artists aren't. Hopefully with the
internet though, they can be popular in a different way, where they
have a day job and they still get accolades from web crawlers and
bloggers like yourself. It's a beautiful paradox.

If you and your husband divorce, would you ever go on a date with me? I think any girl I'd be dating would be okay with this.

If my husband and I divorce, I'll probably end up living in ashram somewhere।

Posted by Blueblogs at 2:56 PM No comments: Links to this post 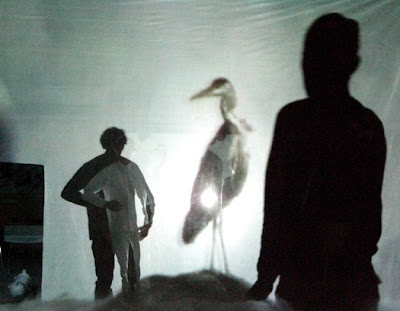 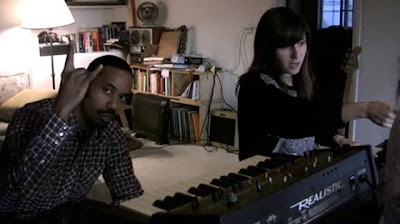 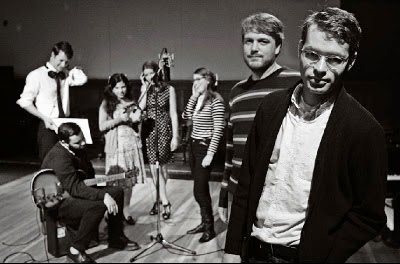 I haven't written anything in a while, instead I've been watching 30 Rock and Jersey Shore. I don't get it, I talk shit about all the trash on television and then I watch the trashiest show on TV, Jersey Shore. Maybe I like it because I love sub-culture and I really know nothing about this sub-culture? I'm not sure. Anyhow, this is what's been good.

All of you know who The Knife is. If you don't, WHAT FUCKING ROCK HAVE YOU BEEN HIDING UNDER? Everything this group does pushes the boundaries of sound and never looks back on the past, only the future. If you didn't hear either of their solo projects last year, you need to get on that shit. It's quality stuff.

Either way, they're currently working on an opera. What the fuck? An opera? They're pretty ridiculous, but that makes them far more interesting. Riiiiight? The opera is a tribute to Charles Darwin and is called “Tomorrow, in a Year.” The work should reflect the text by Darwin from On the Origin of Species. The work will contain 3 singers. Each singer will be singing from a different background, electronic pop, classic opera, and performance. The Knife will be arranging the music and words to the opera. I've only heard one song from this but I am very excited to see what else comes out. Hopefully this is released on DVD. I'm sure visually this will be amazing.

The Knife in collaboration with Mt. Sims and Planningtorock: "The Coloring of Pigeons"

In case you guys haven't been following, Dam-Funk and Nite Jewel have collaborated on a great new track called "Am I Gonna Make It". It's a great mix of Nite Jewels lo-fi funky disco and Dam-Funk's futuristic funk. The recording was made for XLR8R's video podcast Tune in an Afternoon. Nite Jewel produces the track and Dam-Funk sings and adds his own input on the production. Make sure to watch the video. Watching the song come to life is half the charm.

Nite Funk: "Am I Gonna Make It"

Nite Jewel: "What Did He Say"

Young Man is a new lo-fi, dream pop, bedroom artist. This style is very popular right now and seems to be making the blog lists all around. This guy is very reminiscent of Panda Bear and Atlas Sound to me but is still charming in its own way. Don't think I'm dying to hear this live but it's nice background music for my room or nice waking up to. I'll see how the full length comes out. It's due out early this year.

Gigi is a project of two men who love Phil Spector and the Wall of Sound. The group is based out of Vancouver and is the work of Nick Krogvich (songwriter) and Colin Stewart (producer). For those of you who love 60's pop production and harmonies, this should be your cup of tea.

This record comes out Jan. 26th, 2010. The record also contains credits to groups such as Black Mountain, Cave Singers and Destroyer. In some way, this reminds me of a Martin Scorsese movie, mostly Mean Streets.

(third photo from the top)

Gigi: "No, More Heart Will Go"

Gigi: "I'm Not Coming Out Tonight"